The theme of this year’s WOD was ‘Step Up for Bone Health’. It was fabulous to see our many APCO members working proactively to raise awareness of the importance of early detection, and treatment of osteoporosis. This is particularly crucial in the Asia Pacific region, where over the next two decades, a staggering 319 million people aged 50 years and over are projected to be at high risk of osteoporotic fracture due to the rapidly ageing population, mounting urbanisation, and subsequent increase in sedentary lifestyles.

In addition, more than 50 per cent of the world’s hip fractures are expected to occur in this vast and heterogenous region, currently home to 4.5 billion people by the year 2050. WOD therefore, provides a strong platform to raise awareness of this important public health cause.

Keep reading to learn how our some of our APCO members representing 20 countries and regions throughout the Asia Pacific, celebrated this important occasion – namely Australia, China, India, Pakistan and Singapore. 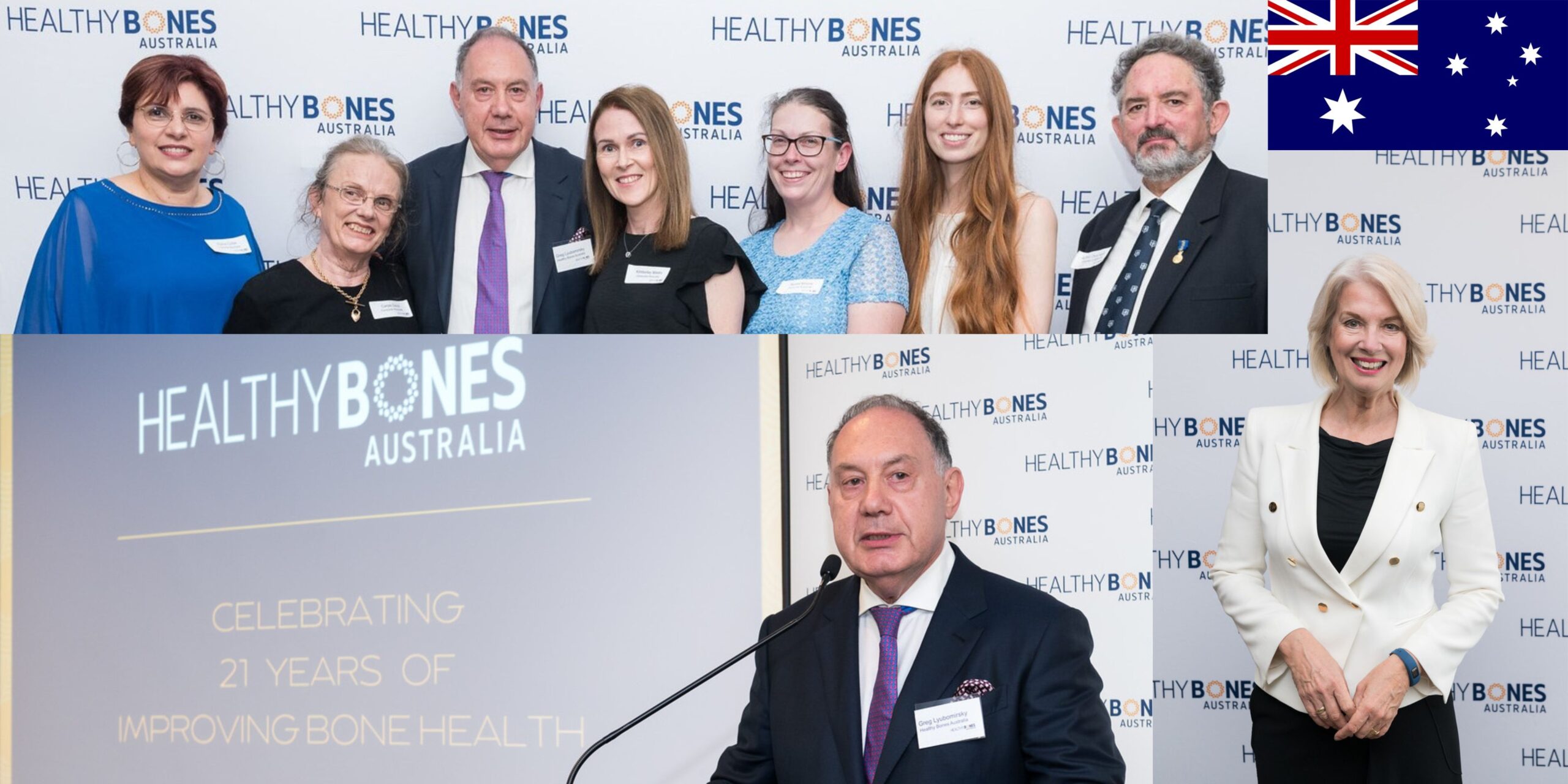 In the lead up to WOD 2022, Healthy Bones Australia hosted a special event to mark its 21st anniversary of championing bone health. The organisation’s CEO, and APCO Executive Committee member, Mr Greg Lyubomirsky, said “Our 21st anniversary allows us to reflect with pride on our many remarkable achievements to date.”

According to Healthy Bones Australia Chair, Professor Peter Ebeling, AO, “As recently as 20 years ago, bone health was a largely overlooked, and untreated area. Osteoporosis is now however, recognised as an important chronic disease, and a health priority in Australia.”

Healthy Bones Australia Patron, Ms Helen Dalley, thanked the organisation’s loyal supporters, and explained that while there have been many successes, there still remains much more work ahead.

At the event, Mr Lyubomirsky announced that Healthy Bones Australia will partner with an Australian company to validate a new diagnostic tool for osteoporosis, following a decade of research. Known as ‘OssView’, the diagnostic tool is a compact, high-resolution CT scan with specific bone fragility software which examines the support structure of the bone.

Supporting innovation in diagnostics to aid diagnosis is one of the five main goals for Healthy Bones Australia over the next five years, including the expansion of fracture liaison services (FLS), and updating clinical guidelines.

As a longstanding member of the IOF, Healthy Bones Australia supported the WOD 2002 theme by promoting the five steps message widely to the community, and urging consumers to self-assess their risk with their online diagnostic tool – Know Your Bones. 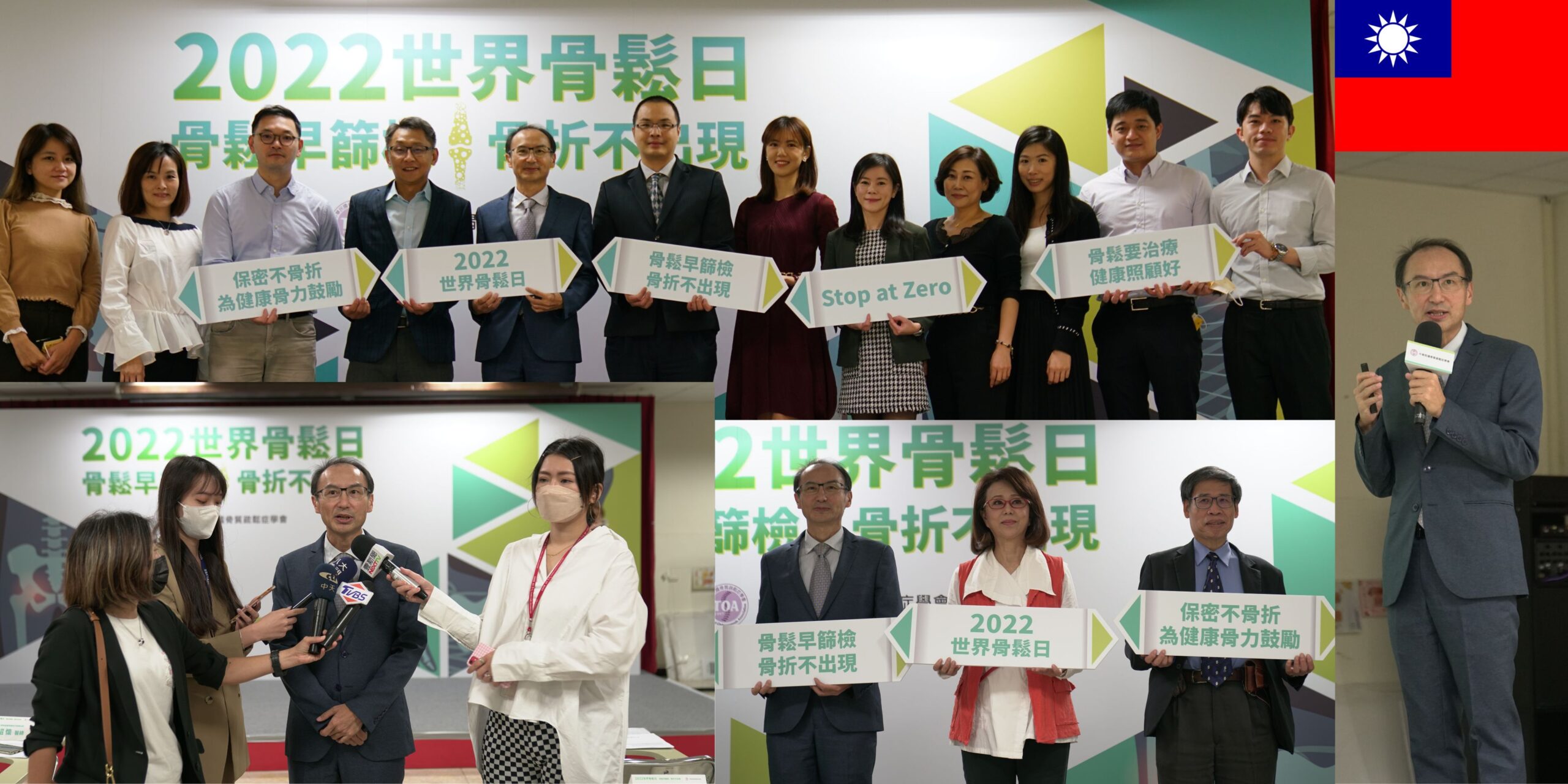 In conjunction with this year’s WOD, the TOA celebrated its 25th anniversary by publishing a 25-year report on Osteoporosis in Chinese Taipei, and hosting a national press conference.

To coincide with this year’s WOD theme, the association encouraged the early screening for osteoporosis. Goodwill Ambassador for Osteoporosis, and Director of Chinese Taipei’s Ming Huayuan Theatre Troupe, Sun Cuifeng urged the community to “Not wait until a fracture occurs to know that you have osteoporosis!”

According to epidemiological data published in the 25-year report, in the Asia Pacific region, Chines Taipei ranks first in the incidence of osteoporotic hip with one hip fracture occurring almost every half an hour. In view of this, improving the early detection, diagnosis, and treatment of osteoporosis has become a top priority.

The TOA has reason to celebrate its 25th anniversary, given their remarkable achievements to date. According to the National Health Insurance Database, the incidence of hip fractures among women in Chinese Taipei dropped from 350 per 100,000 people in 2008, to less than 300 per 100,000 people in 2015 largely due to the work done by the TOA increasing awareness of the disease.

The Chairman explained the organisation would continue to strive to reduce the incidence of osteoporotic fractures, and to create healthier lives for the older population of Chinese Taipei. 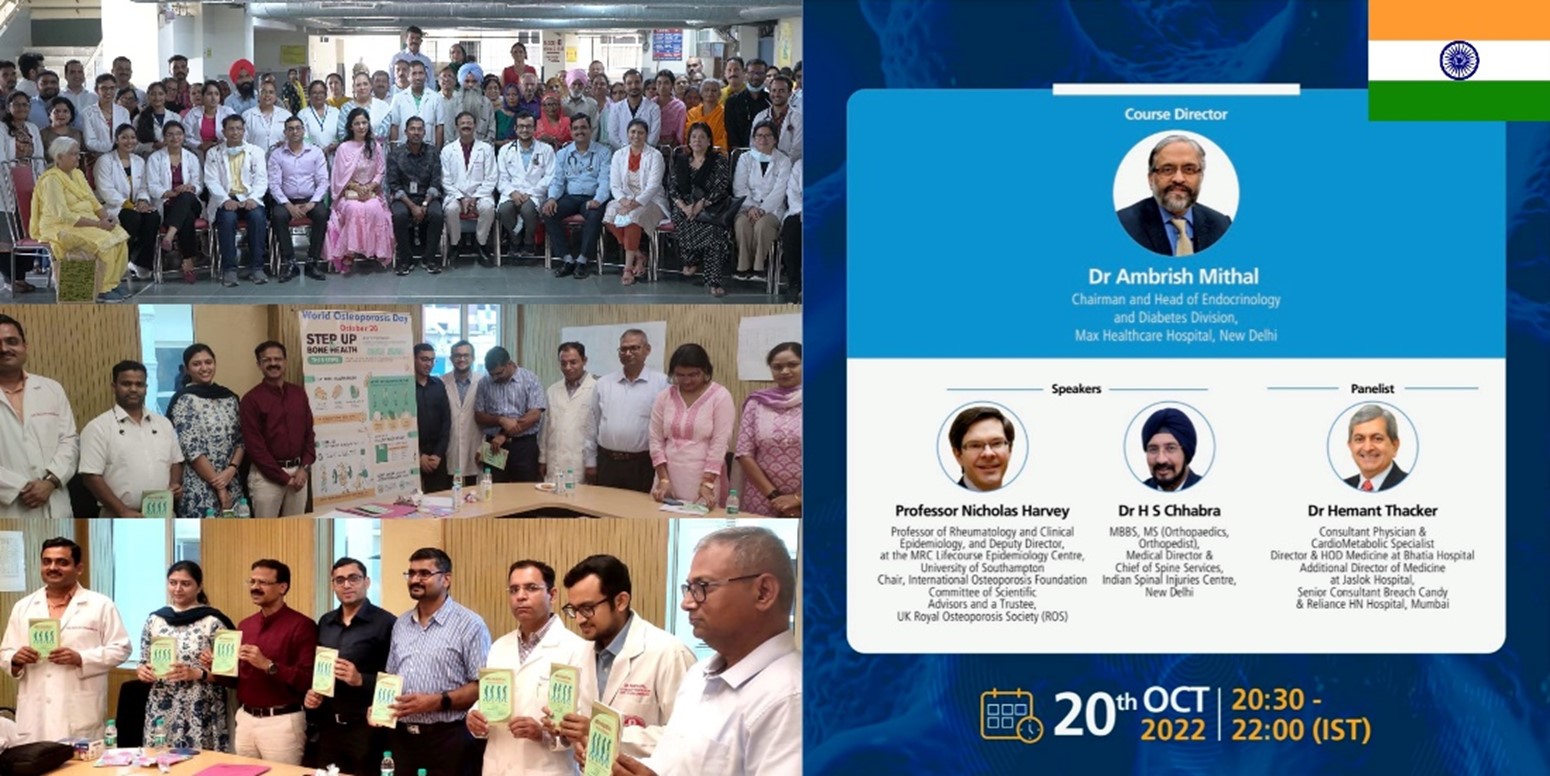 On WOD, The Indian Society for Bone and Mineral Research (ISBMR) held a virtual meeting for doctors in collaboration with the IOF, during which clinicians addressed the audience and participated in a panel discussion.

To mark WOD in Chandigarh, India, the Department of Endocrinology at the Postgraduate Institute of Medical Education and Research (PGIMER) conducted two extensive media campaigns. The first campaign centred around raising awareness of osteoporosis, while the second featured the release of a new book for people living with osteoporosis.

On October 18, 2022, PGIMER held a press conference to raise community awareness of osteoporosis, and the risks associated with sustaining fractures in later life, which received strong media coverage.

Two days later, on WOD, the PGIMER staged an osteoporosis awareness campaign at its new premises, which was attended by nearly 150 people, including physicians, Department representatives, people living with osteoporosis, and their families. Spearheaded by APCO Executive Committee member, and Head of the Department of Endocrinology at PGIMER, Professor Sanjay Kumar Bhadada, Chandigarh, the attendee doctors discussed osteoporosis, its magnitude, symptoms, screening, and various treatment options available. Furthermore, all participants were given a free booklet entitled, ‘Osteoporosis-Karan and Nibaran’, highlighting the daily activities involved in the prevention and management of osteoporosis.

From October 19-21, 2022, the Bone & Mineral Diseases Research Group at Aga Khan University and Hospital, Karachi, Pakistan, celebrated WOD with much zeal and enthusiasm. The two-day event strove to raise awareness, and to educate the community and healthcare professionals about osteoporosis. A variety of activities were coordinated, including Facebook live sessions, media relations, blog posts and reels leveraged via the Group’s website.

Of particular importance was the Facebook live session on October 19, which aimed to increase community understanding of osteoporosis and joint health, particularly issues relating to geriatric bone health, and the importance of monitoring bone health in those aged over 50 years, and post-menopausal women. The session further explored the long-term consequences of untreated osteoporosis – namely bone fractures and chronic back pain.

Another win for the Group was the publication of an article – ‘Step Up for Bone Health’ – in Pakistan’s national newspaper, written by Aga Khan Karachi Rheumatology Consultant,
Dr Mehmood Riaz, focusing on the prevalence of osteoporosis and fragility fractures worldwide.

On October 21, the Group also staged a case-based discussion forum under the theme,
‘Bone and Mineral Matters’. Various fragility fracture cases were discussed, and researchers further identified problems with patient recruitment and behaviours towards geriatric bone health. A number of solutions for moving forward were also proposed. 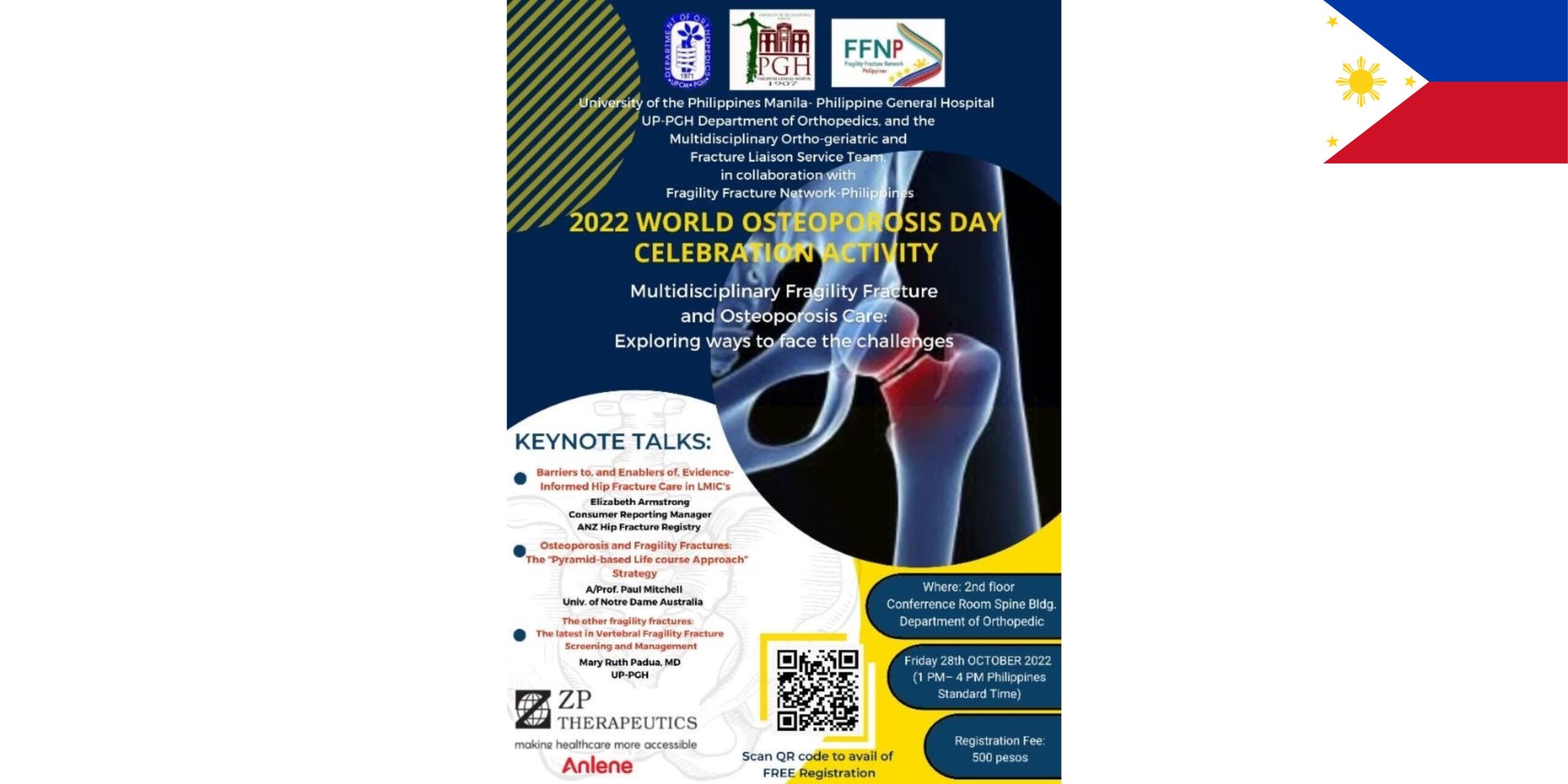 To celebrate WOD in the Philippines this year, the Department of Orthopaedics at the University of the Philippines, Manila, is planning to host an event tomorrow (October 28) under the theme – ‘Multidisciplinary fragility fracture and osteoporosis care: exploring ways to face the challenges.’

The event will feature both live, and streamed talks from local and international speakers. Clinicians from different sub-specialties, such as Orthopaedics, Internal Medicine, Rehabilitation Medicine, Family Medicine, as well as other allied healthcare professionals, including nurses and physiotherapists, will attend the event. A special forum for patients will also precede formal presentations on the day.

This year’s WOD activities will once again, be performed in collaboration with the Fragility Fracture Network (FFN)-Philippines and the Philippine General Hospital (UP-PGH) Orthogeriatric and Fracture Liaison Service (FLS) team. 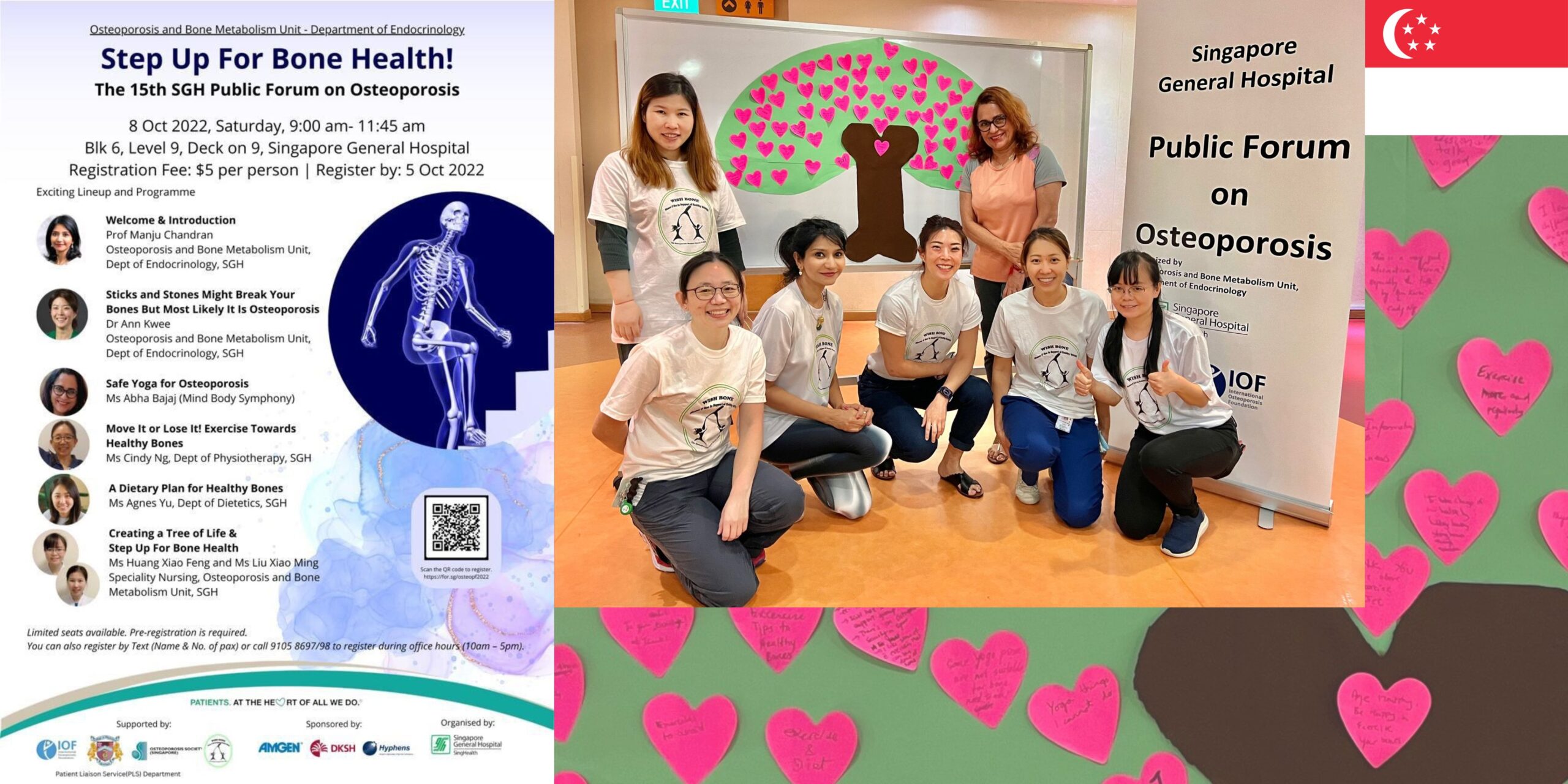 This year, the Osteoporosis and Bone Metabolism Unit at the Singapore General Hospital had an early start to their WOD celebrations at their 15th annual Public Forum on Osteoporosis, held on October 8, 2022.

Representing the first face-to-face event for the organisation in more than two years, the event was eagerly anticipated by the Singaporean community, with a sold-out attendance of nearly 200 people.

The audience loved the forum’s interactive sessions, including a lecture on the ‘Silent disease’ which is ‘more likely to break your bones than sticks and stones’, vibrant physiotherapy and yoga sessions on achieving optimum bone health, and a Bone Diet session that provided valuable information on feeding one’s bones well. The session concluded with the attendees creating a ‘Bone Tree of Life’ featuring positive, healthy bone-related messages, and valuable knowledge they had acquired from the forum.

A delicious afternoon tea was catered by Dignity Kitchen – a project that empowers differently abled individuals through workplace training in the food and beverage industry. The food was not only enjoyed by all, but also served to emphasise the importance of following a diet rich in bone-building nutrients.

The Osteoporosis and Bone Metabolism Unit was proud of its ongoing commitment to raising community awareness of osteoporosis, and supporting the IOF in its global efforts to reduce the burden of the disease, and fragility fractures.

Every year, WOD provides an opportunity for APCO members to come together, to raise awareness of this important cause, and to celebrate their many achievements to date. It is heartening to see the different cultural approaches and executions in celebrating this global health initiative across our member nations and regions.

To learn more about APCO’s commitment to developing tangible solutions to the substantive challenges involving osteoporosis management and fracture prevention in the most populated and fastest growing region of the world, head to:  apcobonehealth.org and follow us on LinkedIn.

“The journey of a thousand miles begins with a single step”