BMD Reference ranges for the diagnosis of osteoporosis in Asians – Time to rethink?

The diagnosis of osteoporosis is operationally based on a measurement of bone mineral density (BMD), preferably at the femoral neck or total hip. According to WHO’s recommendation, osteoporosis is defined as a BMD T-score of -2.5 or lower at the femoral neck. This threshold of -2.5 was actually a compromise of prevalence, clinical association and subjectivity (e.g. “we know it is true” versus “we know it is not true”). It was chosen so that the prevalence of osteoporosis is equivalent to the lifetime risk of fracture among Caucasian women, which is about 30%.

Although the concept of T-score was heavily criticized as a flawed approach, it is widely used in clinical practice to make a diagnosis and initiate treatment of osteoporosis. Statistically, T-score is calculated from the mean and standard deviation of BMD measurements derived from a reference population aged 20-29 years (i.e. peak BMD). The International Osteoporosis Foundation (IOF) recommended use of the NHANES III data as a reference range for the diagnosis of osteoporosis for all populations.

However, BMD is known to differ between ethnic populations, and the difference is not due to artificial factors. For example, among pre-menopausal women, Afro-Caribbeans have higher BMD than Caucasians, who in turn, have higher BMD than Asians. Moreover, peak BMD among Asian women (Chinese and Japanese) is also substantially lower than Caucasian women. We previously noted that peak BMD in Vietnamese women and men was ~9% and 7% lower than Caucasian women and men, respectively.

In summary, it is clear from the above studies that the use of NHANES III reference range can result in a substantial overdiagnosis of osteoporosis in Asian women and men. The overdiagnosis can potentially lead to unnecessary anxiety for patients and overtreatment. If the NHANES III reference range is to be used for diagnosing osteoporosis in Asian women, an adjustment seems appropriate. 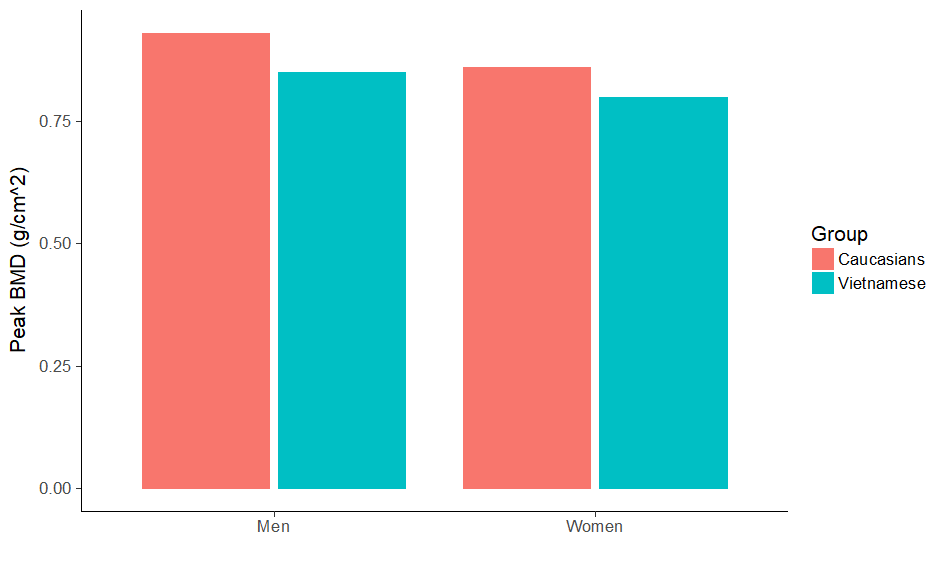 “The journey of a thousand miles begins with a single step”